“I don’t have much of a challenger’s spirit,” Kame says. “I prefer stability.” Kame explains that she doesn’t really enjoy trying out new things, including something like new menu items at her favorite restaurants. The problem with new menu items in particular, as Kame sees it, is that even though they usually seem pretty good initially, the restaurants always seem to ruin them by adding in some strange, unnecessary ingredient at the end — something like orange peels or wasabi soy sauce.

“That’s just an issue of you being too much of a child,” Gaki-san explains. Gaki-san herself is someone who is always eager to challenge new menu items. Kame thinks that her own need for stability stems from her love of home. Just yesterday, she came home feeling super exhausted after a full 13 hours of rehearsals with Morning Musume. When she did, her mother immediately welcomed her back home and this alone made her feel so glad. “That’s why I don’t want to challenge new things,” Kame says, meaning that she prefers to feel like she’s always at home.

Fan mail #1: The listener writes in to the show to report that she and her boyfriend will soon be celebrating their two-month anniversary. She asks the hosts to celebrate this landmark achievement.

While this is indeed a happy event, Gaki-san says they received another similar message:

Fan mail #2: “Gaki-han, Eririn. Me and my boyfriend started dating a month ago. Things are going well between us, so please give us your blessings. But just between you and me: I actually love Gaki-Kame more than I love my boyfriend.“

“That’s such a lie! Think about it: you never message us about the anniversaries of how long you’ve known us!,” Kame complains.

Still, the hosts are glad to hear that so many of their listeners are happily in love. They give their listeners a celebratory “yaaaaay!” With that out of the way, the hosts agree that these two listeners can send their next such announcements to the show when they’re celebrating their one year anniversaries. 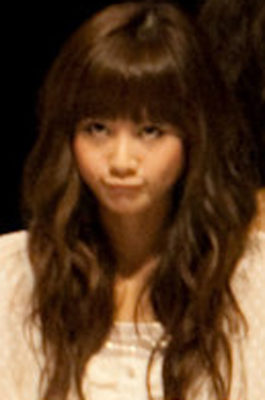 Fan mail #3: This listener says they have something they wish to consult our hosts about. The listener is a graduate student who will soon go on to studying the human body. As it is research that they’ll be doing, they must come up with something all-new. However, they have always been rather hardheaded and they are having no luck coming up with ideas for research. He wishes to ask Kame in particular: is there anything she wants to know about humans that is not yet known? Any cool mystery she wishes to be solved?

Kame says she has loads of ideas! The first thing she thinks of is: “why do human eyebrows look strange if they’re any other color besides black?” What she means by this is that, now that she’s recently dyed her hair, she also went ahead and dyed her eyebrows. She feels that this makes her look like a completely different person. Gaki-san points out, though, that it’s equally as weird if someone dyes their hair and only leaves the eyebrows black.

Another hair-related thing Kame wants to know is: “why do Japanese people have the desire, when dying their hair brown, to leave their bangs black?” Gaki-san complains and says Kame’s questions don’t really have much to do with human bodies as they do simply with looks. Still, Kame insists that eyebrows especially are one of the most crucial things about one’s looks. Gaki-san does agree with this: performing concerts often causes her make-up to melt away, so when they’re about to begin a new concert tour, her mother will nag on her to grow out her eyebrows already: “you look so incredibly weird without any!“

Gaki-san sums up their thoughts: “humans don’t have anything they don’t need.” Kame agrees, and asks the listener: “please research why it’s necessary for the things that happen to the human body… to actually happen.“ 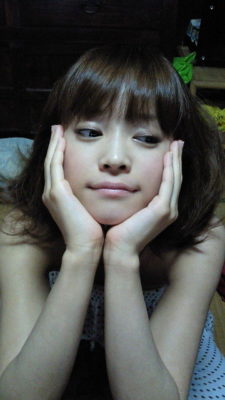 For this week’s first showdown, the hosts will both email their mothers at the same time and see which of the two receives a reply first! “Let’s find out just how loved we are,” Gaki-san says. The two decide to send the exact same email to their mothers: the subject is “chonun” (which is Korean for “I”), and the message simply reads “what are you up to?“

But as they wait for replies, the two move on to the second showdown of the episode… that being a Jenga Showdown! But, before they can hardly even get started, Kame receives an email back from her mother! Her mother was apparently getting some cleaning done. After an intense two minutes or so, Kame also wins their match of Jenga!

Kame now leads Gaki-san 2-0, so for their next showdown it’s decided that the winner will get two points. Their third showdown? Ripping hairs off of their male manager’s legs and seeing who manages to pull out the greater number. Their manager walks into the room, rolls up his jeans, Gaki-Kame get a good grip on his leg hairs, and pull!

Gaki-san manages to pull out two hairs, while Kame gets zero! This means the two are now at a draw, so they have to do a rematch on the leg hair showdown.

Gaki-san again manages to pull out two hairs, while Kame once again gets zero! When asked for a comment from their manager, he answers simply: “it hurt.“

Thus, the winner of this week’s showdown is Gaki-san! 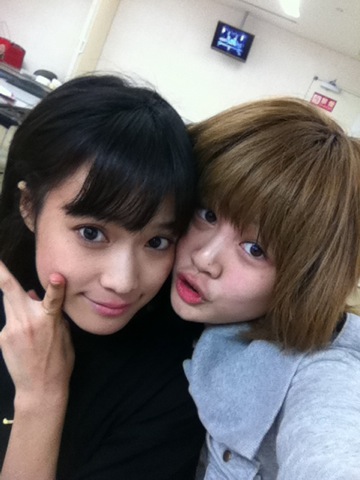 Kame (while imitating a super excited Sakana-kun): We’re waiting for your messages! Go ahead and ask us anything, such as “is it true that Kame has a favorite planet?” Anything goes!