Momochi‘s recently had corn, and the two other chime in with a ‘We like that~’. In particular, Miya likes corn’s yellow colour.

Airi: But yellow’s nice, isn’t it?

Momoko: So how about paprikas?

Momoko points out that the proceedings of this episode have been going pretty pretty sloppily, and the other two make a half-hearted argument that they’re serious – up until Airi makes a pun and even Miya has to admit that yup, they aren’t being fully serious.

How about veggies that they don’t like? At first brush, Airi doesn’t think that there’s anything she dislikes in particular. But then she notes that she prefers not to eat vegetables which have sprouts. Momo doesn’t like green peas. Like what’s the point of green peas?

Airi: Even their name is peaceful. You see – ‘Green peace‘.

The other two play along with Airi’s pun for a bit before segueing into the end of the first segment.

Momoko: So today, while eating green peas, let’s go through the end of this lovely summer. 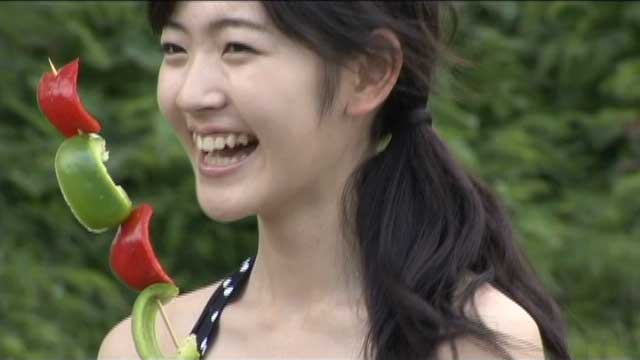 Today’s discussion topic: Methods of dealing with times when you’ve got no motivation, when you feel like playing hooky from work or school

Airi: Look for your motivation switch!

Momoko: And where is that located?

Airi: In the depths of your heart.

Momoko: And how do you flip it?

Momochi brings up stamp cards as a motivational tool. In the past, she used to collect stamps on a card every time she helped out at home. Once she’d collected enough stamps, she’d get 100 yen from her mother.

This reminds Miya of the stamp cards used during radio calisthenics. Despite her morning sleepiness, Miya would force herself to get up to do them because of the ice-cream reward. As for grown-ups, perhaps they could give themselves a reward.

Airi suggests setting a goal for growth – like ‘This is how I am right now, and this is how I’d like to be at the end of summer’. And perhaps one could build up something, like chocolate stockpiles, throughout the progress of the goal – to create excitement upon reaching the end of that goal. That’s the girls’ other suggestion: cook up some sort of scheme to make going to work or school something to look forward to.

‘I work at an office in the city. The other day, some of the male employees commented that “You can do work, but you aren’t the type who’d want to be a housewife”. I just ignored it since I was busy working at the time, but thinking back on it, it gave me a bit of a shock. What should I do for men to think of me as a woman who would like to get married?’

After commenting on the painful situation, they call in Airi-sensei.

The reason: At surveys that rank ‘Which idol would you like as a wife?’, she always ends up near the bottom. She’s ranks highly as a desirable girlfriend or little sister, but not as a wife.

Momoko doesn’t see that as being too bad. In her eyes, that’s still positive – the sole time that she got a top rank was for ‘Person that seems to be good at saving money’.

Miyabi: So they do exist! Here’s one in front of our eyes!

Airi-sensei suspects that perhaps guys might be looking at different things when they’re ranking desirability as a wife – like the ability to cook, or handling children. Occupations such as nursing or teaching at kindergartens often top those sorts of lists as well.

Going back to the listener, just because her male colleagues wouldn’t want her as a wife, it doesn’t mean that she’s completely undesirable as wife material. There’s probably someone else out there for her. But if she doesn’t like being labelled that way because it sounds like she’s very distant, perhaps she should try being a bit more girly, like not appearing to be too competent, or switching from spectacles to contacts . Maybe show an unexpected side to her, like being able to eat tons. (Miyabi: ‘Girls who are chomping away are cute, aren’t they?‘)

Momoko: Anyway, don’t pay it much heed. Your strengths are charming in their own way, so let them out freely. That’s the most important thing, right?

Airi-sensei: That’s right. Everyone, do your best.

Turning the question on its head, the girls talk about traits they’d desire in a husband. Airi would want someone like her father, who promptly comes home early every day. Momo would prefer someone who likes kids, rather than keeping to themselves when they’re at home. As for Miya, people who like to go drinking wouldn’t be on her list. She’d prefer it if they were willing to take turns to do things like the washing as well.

Airi-sensei: Well, when it comes to marriage, everyone has different tastes. So please don’t get dejected just because of a single person’s words. Just be yourself, and you’ll be able to have a wonderful wedding. 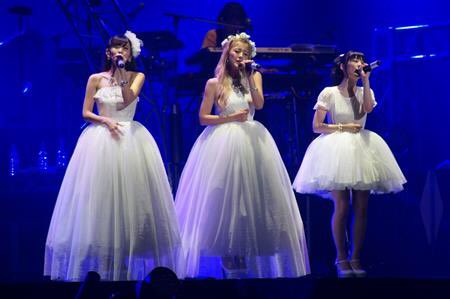