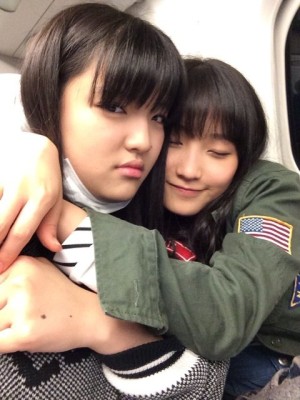 Message 1: Kanon received many messages this week regarding the spring tour performance at Nakano Sun Plaza where she made the declaration of going on a diet. They express concern over keeping to the diet when she often speaks of very delicious food on this radio show.

Confused, Kanon initially jokes, “But, we talk about things other than food…”. But, because she is on a diet, she will actively try to decrease the amount of delicious food talk on the show. It’ll be ok to talk about things that abide with her diet (things that are low in calories or are just generally healthier) but maybe not about fried food or barbeque. It’ll be necessary to decrease talk of it, but once her diet is over, she’d like to bring back discussions about any type of food. The staff asks her what is the number one food she would like to eat right now, to which she answers popcorn. More specifically, the caramel or cheese variety. I guess there are many gourmet popcorn shops opening up recently that offer many different types. Kanon really likes them, but because she started her diet recently she of course shouldn’t eat them. To add to her troubles, her hometown, Aichi is known for their sweeter specialities such a dorayaki and tempura maki. She doesn’t even necessarily want to eat them, but hearing about them makes her sad that she can’t. Also, Kanon desperately wants to go on a curry date with Sakura and eat Indian style curry, although she shouldn’t. In the end, she doesn’t want to stop fans from sending in mail as they like, because she has made it her mission to complete the diet plan successfully, she doesn’t think she will have too much trouble.

Message 2: Riho’s latest photobook titled “16 year old” recently went on sale. In an interview Riho said that she thought the photobook showed off a slightly more adult-like version of her. Because Kanon is also 16  (at the time of recording), the listener wonders if she can share anything about Riho growing into an adult and becoming less childlike. In addition, they wonder what progress Kanon has made into growing into adulthood as well.

First, you can tell she has grown just by listening to her singing voice. In reference to the song, Silver no Udekokei that just played on the show, you can tell Riho’s voice sounds very young. When you hear Riho now, she sounds much more adult-like, Kanon thinks. Also, during rehearsals everyone will be playing around and when the teacher alerts everyone to listen to them, Riho is the first to stop and listen. Before, the two would play around together, but now it seems like Riho has become the number one senior and feels the need to go about more adult-like. Kanon also references her opening talk in saying there are many times where Riho is still child like. She is mostly in high spirits around the other 9th generation members; during photo shoots she’ll make strange, goofy poses. Kanon has lots of pictures of said poses on her cell phone. As far as Kanon being more adult-like, she admits to still being more of the type to play around but, during lessons at school lately she’ll pay attention more. She doesn’t think she has changed very much but perhaps has become more calm.  Kanon explains that she wants to do everything during lessons and rehearsals accurately.

Message 3: This writer thinks that Kanon’s voice is clear and easy to hear even with 13 girls in the group now and they are singing in unison. They would like to know if there is a member Kanon likes to sing with, or if there are members it is easier to sing with.

She’s happy to hear her voice can be heard well, although she associates it with her voice simply being bigger than others in general. Probably, Kanon thinks she might be most complatible with Mizuki’s voice. When doing a mic check at concerts or events, she thinks that her and Mizuki’s voice have a distinctness to them for being loud. She isn’t sure if its voice compatibility but Kanon likes how the sounds together. In addition, Kanon also thinks it’s easiest to sing with Mizuki. When they have parts together, Kanon thinks to herself that she is happy its with Mizuki, as it’s easier to pair their voices together. After Mizuki, Haruka is her next choice. Because they both have lower voices, their singing voices are nice together. There isn’t really a song where they sing together yet, but Kanon thinks it would like to see the unexpected pairing. With their two lower voices they could show a different type of idol. 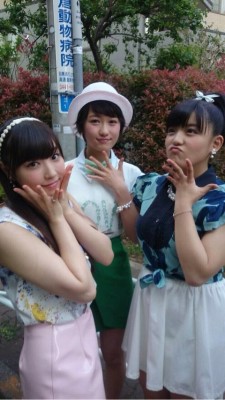 Kanon dropping hints all over the place

Ranking 1: Top Three Curry Toppings. The sender gives their top three as well, 3. fried cutlets, 2. Croquettes, 1. Cheese.
3. Fried Cutlets. The same as the sender, she notes. In particular, Kanon likes filleted cutlets. In her opinion, when the fillets are grilled, it creates a better flavor.

2. Mushrooms. Its not a topping you’ll find at curry restaurants, though. If she makes a curry bento, she will always put mushrooms in it. She reveals that she never gets sick of mushrooms because she loves them so much.  She also looks forward to eating mushroom curry again when her diet is over.

1. Cheese. Also the same as the sender. Kanon nevers gets tired of cheese, especially in curry when it melts into the sauce. Although, when it comes to cheese, in general, Kanon likes using it a lot in her cooking. To affirm her love for cheese, Kanon says went with Nakanishi Kana to a cheese shop in Shibuya to try many different kinds. Mushrooms might be on the same level as cheese though, since she loves both of them.

Ranking 2: Top three members to share a hotel room with.

3. Haruka. In 2013, during summer break, Wagamama Ki no Mama had released recently and they were in Kochi for a Hello! Concert. During that time, Kanon was always paired with Haruka which made her realize that they can get along with each other very easily. They both like watching TV and during their chats they realized that they had many of the same worries about the group. Kanon is happy that she was with Haruka for a while because their relationship became stronger.

2. Mizuki. When she’s with Mizuki, they can both enter spoiled child mode. When she is doing anything with Mizuki, Kanon easily feels safe and can get a little lazy. Mizuki is the leader, so she of course is the type to be very reliable for the most part.  But, when they share a hotel together Mizuki will play around and be childlike with Kanon. Its a rare sight but the two of them will goof off and relax when they’re together.

1. In the First Place, Being Alone is Better. Laughing, Kanon says being paired up with Haruka and Mizuki is fine, but being alone is what she likes best. Remembering a time before Sakura, between the 9th and 10th generation there are only 8 members so they would generally get a room to themselves. As more members have joined there have been more instances of having to pair off with someone. She explains that she feels most comfortable being in a hotel room by herself as she can go into a lazy-mode without the worries of judgement. In fact, she’s the type that won’t get up from her bed as soon as she lays down. She feels that she can’t be as lazy as she’d like if she has to share a room with a member, so while Haruka and Mizuki are nice to share a room with, in the end, by herself is best.