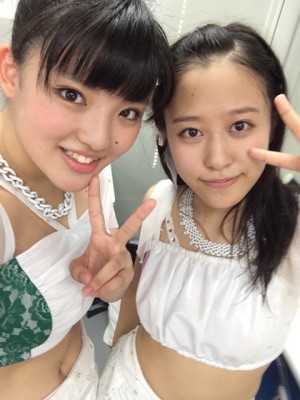 Regarding TokiSora, Kanon’s favorite part is at the hook, with the strings, right before the vocals start; the strings sounds lonely and match the songs lonely feeling. Sakura shares that she likes Tsunku’s songs, but doesn’t know if she likes any certain part especially. Listening to instrumentals isn’t really Sakura’s style, since she prefers hearing the vocals as well. Kanon understands, but continues expand on the benefits to instrumentals: there are subtleties to hear in the instrumental versions, like the hollow sections of “Baby Stop, Stop, Yamete” in Wakuteka Take a Chance and that match the dance. Sakura suddenly comprehends what Kanon is explaining and thinks that it must be good to listen to instrumentals, since she can listen to it like its the regular song playing in her head. Although, its more work than just regularly listening to the CD, so Sakura still isn’t that interested in it.

Message 2: The listener makes note that Kanon is the only member who is B blood type in Morning Musume. They wonder if this makes for any differences for her in the group and if she has any stories to share regarding it.

Sakura explains everyone else in Morning Musume is either A-type or O-type. They ponder who has what blood type further, realizing most of Hello! Project is A-type and that B-type is quite the rarity. For an example of her blood type personality, Kanon shares that she has to be careful when sharing a bed with other people, as there is a good chance she will kick them out of the bed while sleeping. Sakura wonders how her cat fares with that, but Kanon says it doesn’t happen if its Bii-chan.

Sakura sidetracks the conversation into how she thinks cats sleeping/personality types are based on their color (she has five cats, by the way). Sakura’s cats Momo and Taku want to sleep on Sakura’s pillow (they are both black). Momo is particularly troublesome, as she wants to sleep on Sakura’s face. Continuing the cat to color correlation, Sakura thinks white cats are more strong-minded than others. Kanon is amazed by her knowledge, to which Sakura explains she has had cats for about ten years now. They got really off topic, but to conclude, Kanon mentions that while A and B types don’t usually get along that well, Sakura is the first A type that Kanon thinks she is pretty good friends with.

It always goes back to cats on this show…

Sakura receives a request to give her best of 3 on: Top 3 things Sakura would like to say freely to Kanon to fix problems.

3. Kanon’s Strong. Kanon asks her why strength, to which Sakura exclaims “You’re strong! It hurts!” When playing around she’ll hit people yelling “What’s that??”, as a straight man, but she ends up hurting Sakura. Kanon says she isn’t really trying to hurt anyone and apologies for being strong.

2. Goes in between being cold and warm. When Kanon is being warm, she starts her sentences with “Kanon is~” with more upwards inflection; although Kanon protests that she is like this. When she is being cold, she’ll simply respond or reply with “Ha.”, or some other type of grunt. For example, Sakura will hand her water or something and Kanon will only respond with a “Oh. Thanks,”. Again, Kanon doesn’t think she does this. Sakura backs her statements up by saying Kanon is more likely to be sleepy if she does it. To defend herself, Kanon retorts that she responds to Sakura in more of a way she would respond to her family, and asks her to to forgive her.

1. Their talks don’t get deep. When they go out to eat, Sakura will mention something, but rather than responding meaningfully, Kanon is more likely to respond “Yeah,”, which is annoying for Sakura. Once more defending herself, Kanon explains that she is satisfied by what Sakura said so she doesn’t think there needs to be a response. Thats not a good defense however, as Sakura wants to have a more thoughtful conversation.

Next, Kanon’s topic: Top three things that Sakura has said that make Kanon happy she was born.

3. “Ah, is it ok to use the phone?” Basically, Kanon wasn’t very good at using her phone, but because Sakura likes sending messages and using the phone in general quite a bit, Kanon got better at using it. Sakura adds to this saying that she will use her phone quite late at night talking to her friends.

2. “Suzuki-san, please don’t run away,”  Around the time that Sakura said it, Kanon had to sit out at concerts and rehearsals due to her foot injury. Sakura came up to her at some point and said “Don’t run away” which Kanon simply thought was amusing.

1. “At that time, I wanted talk to Suzuki-san,” The face Sakura is making shows that she can’t remember when she said it, Kanon says. But after she thinks for a moment she remembers: Kanon had to stay home from a concert due to influenza. There was some sort of trouble, and when Kanon later asked if Sakura was ok, she replied with “I wanted to talk to you,”. Kanon hadn’t seen anyone for quite a bit and hearing that someone missed her made her happy. 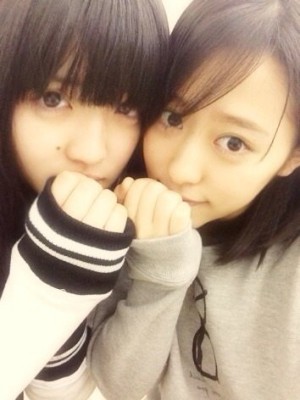