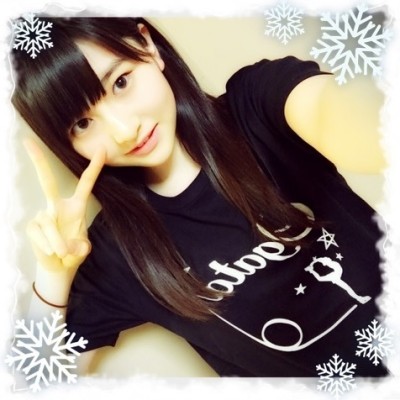 Ogata than brings us back to the subject of granola and 12th Gen’s love of it. They’re all obsessed with it, but everyone’s into a different flavor. Ogata herself is all about the soybean-kind, Maria enjoys the normal kind with fruit in it, Akane goes for the “Calorie Half” type ones, and Nonaka eats this foreign granola that doesn’t look delicious at all.

On the subject of granola they start talking about milk as well and learn that they actually have something in common! Maria and Ogata both hate milk! Yay!

“Hello to all the 12th Generation Members. Please introduce some food that you ate and liked as you toured the country with the Hello! Project Concert Tour. By the way, for me, it’s gotta be Fukuoka’s ramen.”

When it comes to Fukuoka, Ogata can’t actually eat ramen, but she is really fond of Hakata’s Torimon and will always buy some to bring home. You can always be sure to find some at souvenier-type places.

She then brings the question over to Maria, stating that since she goes around a lot to see baseball games, she must find a lot of delicious food. Maria concedes that the day after a baseball game because they won’t really have any plans they’ll… well in Hokkaido, she’d go to Shabu Shabu when she was really small. Lately though, she’s been going to a French restaurant instead. The thing she loves eating the most after watching a baseball game, however, is a motsunabe place in Fukuoka. It’s amazingly delicious.

Ogata: All right, next time we’re doing a concert there, I want you to bring us there okay?

As for catering on the tours, Ogata returns to her former love of pumpkin by mentioning that the pumpkin croquettes are absolutely delicious. Though corn soup is good as well.

Maria cuts in with her own experience with catering. For the most part it’s a lot of the same food every time. For example, the miso soup is almost always shiromiso. However! When they were in Aichi, Maria’s beloved akamiso soup was served. Ogata didn’t think there was much of a difference, but Maria insists that there is a distinct flavor difference.

From Yappari Nagoya Meshi No Dekachina:

“Nice to meet you, 12th Generation! Every time I go to Osaka, I always end up talking with a bit of Osaka dialect’s intonations. With Haruna-chan around, do the other 12th Generation Members end up slipping into Osaka-ben? Please let us know!”

Maria starts off by saying that she herself doesn’t really slip into it at all, but Haga Akane-chan is always doing it. Ogata and Maria aren’t entirely sure that they’re “real” slips or if Akane just likes to randomly try and speak in Osaka-ben, but Ogata assures us that Akane’s Osaka-ben is incredibly cute.

Ogata confirms with Maria that she’s been in Nagoya for pretty much forever. Maria mentions that there are a few special dialect phrases, and a few intonation differences. Ogata mentions that Nonaka’s Japanese is very similar to Maria’s. Maria agrees, but says that because it’s so similar, that the few dialect words that they do have when they have slightly different usages, so they get confused.

Ogata: Well then, even though you don’t really like Kansai-ben, let’s have you say a few things here today!
Maria: (laughs) Okay.
Maria: So the very first Kansai-ben phrase was “630 Yen”
Ogata: …(laughs) That kind of phrase?
Maria: Well I went to see a baseball game for Orix Buffaloes. I was with a friend there and her way of speaking was really cute so I was trying to imitate it and that’s the one bit that stuck out in my mind.
Ogata: I think I understand… so 630 yen?
Maria: Yes I recorded her saying it so I could study it.
Ogata: What do you say in Aichi?
Maria: (with a slight intonation change) 630 yen.

(Translation note: If you don’t listen to the clip, what the difference is is that in Kansai/Osaka-ben there is more tones to it. It’s roPYyakusanjuuen, as opposed to roppyakusanjuuen. I actually live in Osaka and I can tell you I definitely say 630 yen the first way and not the second, so Maria’s revelation here was a revelation for me as well).

Ogata: Please listen to my Kansai-ben and record it as well to study, okay?
Maria: (attempted Kansai intonation) I got it! (Wakatta yo)
Ogata: …(corrects) Wakatta, de.
Maria: (with terrible intonation) Wakatta de~
Ogata: ..Ah…whatever (laughs).

Ogata informs us that Maria’s going to do today’s summary in Kansai-ben for all of our enjoyment.

It doesn’t go very well, so instead we return to Maria’s earlier success.

All-in-all, however, Ogata is pretty happy with how today went. She feels like her and Maria have become closer than they were before and she hopes that if they are grouped together again they’ll become even closer.

Ogata: For today’s final message, I think I want to do it in standard Japanese: I really, really want to eat some pumpkin soup!