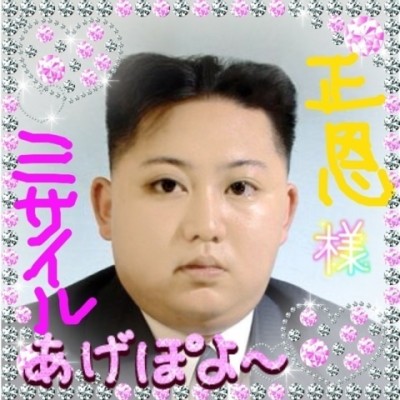 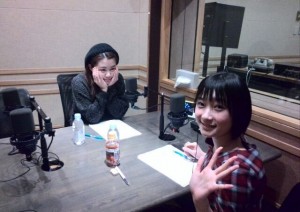 Another letter comes from Ken. Ken is simply writing in to declare his love of Sayubee, which started when he went to see the group on tour at Toyama. He was standing in the back of the venue, where it is noticeably harder to see from those seats and harder to be seen from the stage, and yet Sayubee noticed him in the back and made sure to look and pay attention to everyone in the crowd. He has loved her ever since. Sayubee says that being able to see everyone is one of her favorite things about live houses and making eye contact with people gets them all really fired up. Karin has a distinct memory of that particular show, since it was snowing heavily the day they were there and she was so excited to see snow for the first of the season that she didn’t sleep at all that night. Sayubee thinks that that is silly.

If you couldn’t guess by her card-carrying Reina addiction, this number was brought to us by Sayubee. She has watched performances of this song countless times and YouTube and every so often will mention it in her blog. Karin also notes that whenever they go to karaoke Sayubee will somehow slip it in without her noticing, and Sayubee hopes that one day she’ll get the chance to sing it on stage in front of people. 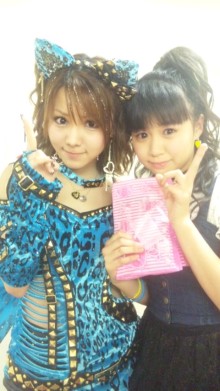 Fun fact: Sayubee looks like she’s been crying in every single picture she’s ever taken with Reina, except this one, oddly

The next song is from their recent stage play, and it’s a song that Karin was exceptionally nervous about singing during the show. In fact, it had such a traumatic effect on her nerves that she gets anxious just listening to it, but here it is, anyway.

Sayubee believes in Santa Clause, and yet, for as long as she has believed in him, she has never seen him. Every year her sister leaves out a red lamp-thing for him to see when he comes to visit, though, and they have done that every year since she was little. She imagines him very typically as an old man with a white beard and a round belly, but she has no idea why this is the image she has when she has never seen him for herself. She talked extensively about this with her sister, but ultimately she cannot come to a conclusion as to what he looks like until she sees him. In any case, she’s very excited for Christmas. 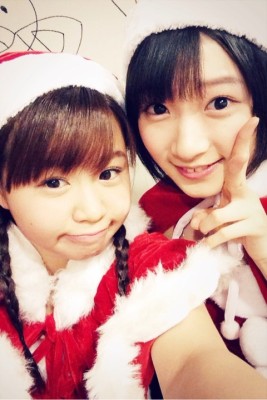 Karin provides us with the closing word after bragging to Sayubee that she has met Santa. Most of her dreams lately have been related to movies. Either she’s starring in a movie or she’s inside the world she saw in a movie, just movie-like dreams in general. She wonders if this isn’t some unconscious desire she has to be in a movie, and it might perhaps be a result of starring in the play and expanding her worldview to more acting possibilities. Time will tell.