Ogata and Nonaka then go on to explain that since they are often together anyway, they’ll usually go together as well. They’ll feel like they’re  making good time and that they will be the fastest but…

Nonaka: This one time the other two were there already when we got there.
Ogata: I was like: Wait what!? How?
Nonaka: Me too.
Ogata: But as it turns out… the two of them had taken a taxi.
Nonaka: Not only that, they didn’t even take the same taxi! They had taken two separate ones!
Ogata: They’re so rich. So, so rich.
Nonaka: Ah… it just feels like… riding by taxi… such a waste of money.
Ogata: That’s because we’re “commoners”.

Ogata wonders if there would ever come a day that the four of them would ride a train together. Neither of them are very confident it’ll ever come to pass… But that’s just how the 12th Generation are, the all just do things on their own.

However, even though the four of them all do things differently, they really are getting along more and more.12th Generation will continue to work their hardest.

Before they get started reading the mail, both of are amazed by just how much mail they are getting from everyone. Nonaka zeros in that it’s also not just from Japan.

Nonaka is especially happy about all the mail from America that they’re getting. But both of them are really happy and thankful to everyone in general whose sent them mail from other countries.

The first mail is from a familiar name, Kikipon:

“Hello to all the 12th Generation Members! My question is: When it was revealed to the public that you were joining Morning Musume, how did your friends react? Please let us know!”

Ogata starts off the answer with that it seemed like the amount of friends she had grew tremendously all of a sudden. Nonaka asks her why does she say that, and Ogata ponders it a moment before going into an explanation. Ogata explains that even people she wouldn’t have considered her friends before were suddenly talking to her a lot. And, whenever she went out into the hallway, everyone would gather around her. Ogata was pretty happy about everyone’s attention.

Nonaka adds that for her it’s like everyone is always watching her. Well… Nonaka mentions that she’s pretty thick-headed about things like this so she didn’t really notice herself that everyone was looking at her, but her friends were constantly saying things like “everyone keeps looking over here”.

Ogata takes over again to say that she felt like she even got closer with some of the people she had been friends with already.

On the day that 12th Generation was announced, it was already night so Nonaka didn’t get any texts at first. And in fact, since she had missed school that day, she got a text asking her if she had a cold or something. But then the next day, after the morning news, everyone was all abuzz about how she had been on TV and then the texts started coming. When all those texts were coming, Nonaka was pretty happy.

Ogata: Everyone became so nice.
Nonaka: (laughs)
Ogata: Not that they weren’t nice before!

Another familiar name, this mail is from Shitain:

“I think that I want you guys to talk about clothes and shopping. What kind of clothes and fashion do you like? And if it’s at all possible could you start talking about fashion points on the show?

It turns out that the kinds of clothes that Nonaka and Ogata wear are completely different. Their tastes are just opposite from each other.

Ogata brings up the fact that the other day she did wear a cute dress. Nonaka remembers this. It had been during work and it had been incredibly cute. Nonaka also remembers that day when she was putting her coat and bag down with everyone else’s, she had noticed this really cute bag and wondered whose it was. When she learned that it was Ogata, Nonaka had been incredibly surprised. She had thought that there was no way that that bag could have been Ogata’s.

Ogata relents that everyone that day kept saying “You’re not the real Ogata!” which of course Ogata had replied with “Yes, I am!!” Nonaka can’t get over how cute Ogata was that day. Ogata agrees that even she, when looking in the mirror before she left, thought that she had done rather well.

Nonaka then realizes that during the audition and when they announced 12th Generation at Budoukan, Ogata had not been wearing casual clothes at all. Ogata admits that she had tried really hard on her clothes those days. Nonaka then goes on to say that Ogata had had a very “maidenly” style, super cute and girly.

Ogata really likes wearing casual clothes like hoodies or parkers. Nonaka suddenly reveals that lately Ogata has been wearing a lot of parkers. According to Ogata, when she wears cardigans, like with dresses, she feels like there’s a bit more of a “fu~ fu~ fu~” feeling, but when she is wearing a parker it’s more of a “ha ha” feelings. She changes. Nonaka doesn’t argue this point. 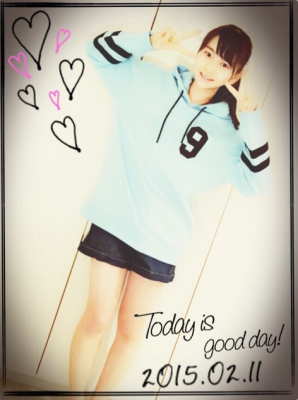 Kudou supports Hoodie!Haruna by giving her another one for her birthday.

Nonaka finally drives the subject back on track, and begins to point out today’s fashion points.

Ogata on the other hand is wearing a plaid shirt.. and… uh… normal shoes. She does have a fashion point however. When she was at the audition, she had had this yellow watch that she loved and wore constantly. In fact she kind of wore it too much. She had also never really worn watches at all before that. Thus Ogata’s fashion point is her yellow watch.

Nonaka actually distinctly remembers Ogata wearing that yellow watch. It really stuck out. Ogata was known in her brain as “The Girl with the Yellow Watch”. At that time the two of them didn’t really know each other at all. For Ogata, Nonaka was “The English Person from Shizuoka”.

As always the girls had a ton of fun doing the show. Nonaka and Ogata vow not to lose out to the younger girls. But as much fun recording this 12Ki Nikki as Haa-Chel  had been, it’s already over. Next time they vow to be even, even, eveeen more pumped up. As the “Big Sis” team, they want to try their best.

Nonaka: Ah… it’s already over… I feel like I could talk so much more…