As unlikely as this word seems coming from the MiyaMiya duo, Karin has taken up regular exercises to build her strength in her abs, back, and arms. She wants her arms to be more toned, especially, but she likes seeing the progress she’s making in general strength, as well. Yuka admits to never really doing any exercise, but Karin asks her, regardless, what muscles she has most confidence in. Yuka laughs, as her arms can’t compare to Karin’s, but she does say that she has kind of a six-pack. Well, you can see the outline of her abdominal muscles, at least, even though she can’t remember the last time she did a sit-up. She also says that while Karin does tend to be a more muscular and toned member of the group, Tomo has the most powerful image of being ripped. Karin acknowledges this to be true, even though she doesn’t think she’s ever seen her do any exercising. That’s the power of Rose Quartz.

This show was also recorded following the opening performance of Koisuru Hello Kitty! The first one is out of the way, now everything should be easy, hopefully. Karin, the star of the show, was quite nervous before going on and said she was squeezing Yuka backstage before and after the show. That’s the only part she remembers because she has completely blanked on what happened on stage. Of course, she received a tape of the performance to go over and adjust things the next time, but that’s the only way she would have known. She has a lot of improvements to make, she says, but Yuka says her performance was fine. All she could see when she looked at Karin was Hello Kitty, and that’s the most important part, after all. 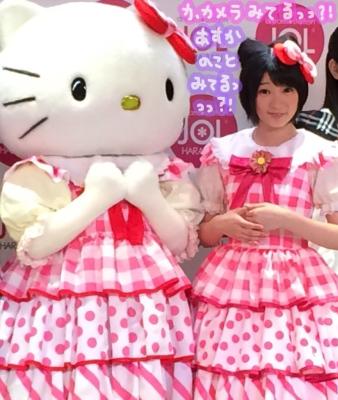 Although Karin says she only wishes she could be as cute as Hello Kitty one day, some fan letters on the play seem to suggest she has already surpassed that. The first letter simply states, “Karin was the cutest girl in the world.” Karin responds with, “…wah.” They wrote more, though, don’t worry. Everybody gets something. Tomo was the hottest in the world, Uemu was the prettiest in the world, Yuka was the kindest in the world, and Sayubee was the meanest… uh, the purest in the world. Yeah, okay. There is no name attached to this letter, but I have a sneaking suspicion that they listed the members in order of how much they liked them.

This letter comes from a mysterious someone who identifies himself as a professional baseball player who is an eternal Hello!Pro and Juice=Juice fan. He simply dropped a note to say that the passion and power the Juice demonstrates encourages him to work harder and that he looks forward to seeing them among the elite of H!P. The next letter is also anonymous, because apparently that’s the trend today, and they wanted to say that they just became a fan after hearing Date ja nai yo, uchi no jinsei wa. Oh, also, they love Karin the most. That’s the other trend today: praising Karin. Despite the fact that they both say that they’ve heard a lot of people converting to Juicing after hearing Date ja nai yo, they play they other song from the single. They’re so hard to get. 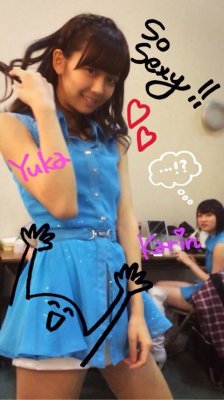 In preparation for the play, the members of Juice adopted a hobby of reading lines of other people’s roles and trying to imitate the actors who normally played those roles. Yuka loves doing Sayubee’s role because she likes imitating the voice she uses, and of course getting to be Hello Kitty is nice. Yuka has had a lot of fun preparing for the play, it’s even more fun than she imagined it would be, and she loves seeing everyone’s faces in the audience smiling. She really wants to be able to do another play in the future.

Although Yuka announces that the next episode of the show will air the day after Karin’s birthday and they will celebrate, the author of the show’s blog reveals that it was recorded immediately after this one and that Karin made the last word (because she got to do both first and last, Karin, Karin, Karin) “candles” because she was thinking about how the whipped cream stuck to the candles in the cake they were giving her was a waste of good whipped cream. No word on whether or not she just licked it off like the rest of the world does. 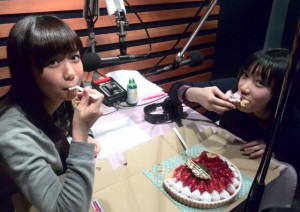