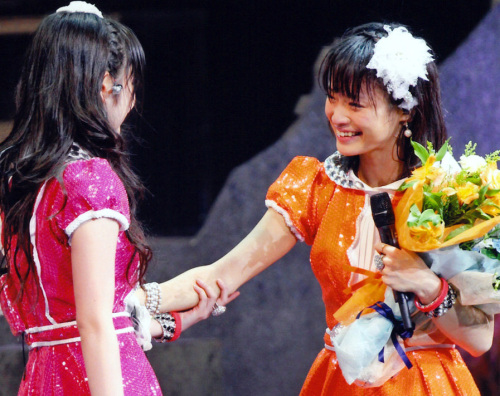 I, Michishige Sayumi, have loved Morning Musume ever since I was little.

The first CD I bought with my own money was “Koi no Dance Site.” Little by little I saved my pocket money until I finally had enough to buy it. I was so happy, and I can’t even begin to count how many times I listened to it.

One day I innocently asked my parents a question.

“What would you do if I got into Morning Musume?”

I asked it like it was a joke, but deep down, I was serious.

The 6th generation members’ audition. There were a total of 14,000 applicants, but by the final judging, there was only five of us left.

There was this really cute girl in the waiting room there. I don’t know if it was because I knew she was from Tokyo or what, but she just looked so refined to me, and I was too shy to talk to her. One by one they called us in to tell us that we were the last five remaining. The cute girl I’d just seen earlier returned to the waiting room, tears in her eyes.

You could see she was so happy, and for some reason, that crying appearance of hers looked cool to me in a way. “Ah, so this is how Tokyo people show their feelings of happiness. This is how they cry.” It made sense to me somehow.

That cute girl, who would later become a fellow 6th generation member as well as my closest friend, was Kamei Eri. 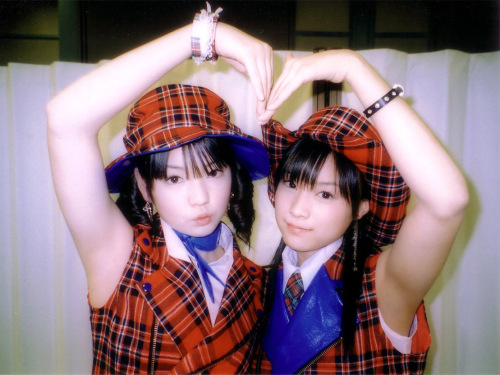 I passed “LOVE Audition 2002” and became a 6th generation member of Morning Musume. I gradually began to get closer to my generation mate Kamei Eri. We were both shy so it wasn’t like we opened up to each other completely from the get-go, but little by little, Eri started to reveal her true self to me.

First and foremost, she is someone who is full of humanness. She expresses her emotions to the fullest — she laughs, gets angry, and cries with everything she has. Unlike me, she never hides any of those emotions.

Before I’d noticed it, the two of us would constantly be together. Things we found fun, things that annoyed us; we were very much alike in those aspects and somehow we were the perfect match for each other. What’s great about Eri is how if she thought something wasn’t right, she would speak her mind and say so — no matter who it was. I continued to be influenced by those traits of hers, and I think I began to gradually change, too.

I always had a dream of starting a blog. I wanted to convey my thoughts to everyone in my own words. But when I finally did get to have one, I’d find myself worrying about the number of readers I had, and I always had my phone in hand just so I could check. This one time, Eri commented on that to me.

“You’re always looking at your blog, even when were together.”

That’s right. Even when I was spending time with Eri, I’d still be worrying about my readers and staring at my phone. I knew it was wrong of me to do so, but I thought it was just a passing thing. I wanted to focus on my blog for the time being. I’d get more chances to talk with Eri later. That’s how I felt about it.

And then Eri said she wanted to speak to me about this properly for once.

She asked me this.

“Why did you start your blog to begin with? It was to talk about your feelings in your own words, was it not? But now you’re more concerned about the number of readers you have. Isn’t that different from what you originally set out to do?” 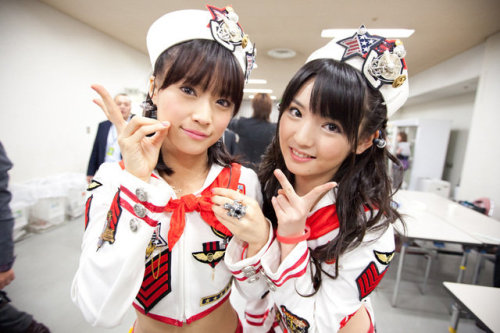 Eri has always calmly watched over me. Right before I was about to become the leader of Morning Musume, I found myself feeling very nervous and anxious about it. I couldn’t stop myself from doing so. When I jokingly mentioned this to Eri, she sent me an email.

“You’re fine just the way you are,” it said.

But it was followed by another email.

Her words of kindness… my tears just came out.

I was so happy that time you came with me to visit my hometown of Ube, Yamaguchi. My grandpa and grandma were so happy to meet you, too. I remember how you were surprised by how city-like it actually was.

That time when you and me were walking around my hometown, surrounded by the sea and the greenery… That time, and your smile on that day… I’ll never forget it!

The other day just after we’d ended one of our usual exchanges by email, you emailed me once more and said “Sayu, feel free to mail me again any time you feel like complaining about something. ♪” It was only reading that when I realized: I’d been complaining to you about something again. (laughs)

I’m sorry for always mailing you about my personal problems. I can tell how you are always cheering me on, and when I make the news headlines or something, you’ll always praise me and tell me I’m amazing, and it makes me so happy.

Eri, I wish for your good health and happiness from the bottom of my heart! 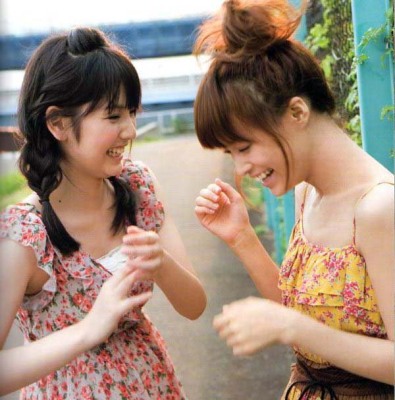 A listener asked Sayu about her letter above on the 2014.02.10 episode of Konya mo Usachan Peace.

Fan mail: The listener heard Sayu’s letter when it was read on air. Commenting on the part about how Eri mailed Sayu and said she’d be “fine because she is who she is,” picturing this in their mind made the listener cry. Hearing this episode about her, they once again felt that “not only is Eririn a genius at making people laugh, she’s also a genius in making them feel deeply moved emotionally.” The listener asks Sayu if she had any trouble deciding what to write about in her letter, and if she heard back from Eri regarding it after the broadcast.

Upon hearing what the theme of the show was, Sayu says she had a total of two options as to who she was going to write her letter to: her one, sole friend from Yamaguchi who she’s known since they were both first grade junior high schoolers, or Eri. But whereas she has lots of episodes she can talk about concerning Eri, her episodes with her friend from Yamaguchi are really trivial, ordinary ones that aren’t very suitable for radio. Thus, she went with Eri.

After the recording for the show was over, Sayu mailed Eri and told her she’d talked about her on radio. Eri mailed her back, saying “No way! I’m looking forward to it!” Sayu notes, though, that despite Eri saying that, she has zero doubt in her mind that she didn’t really bother actually listening to it.

Sayu says she’s mailing a lot with Eri as of late, especially now in 2014. She thus gives some examples of their recent email exchanges. 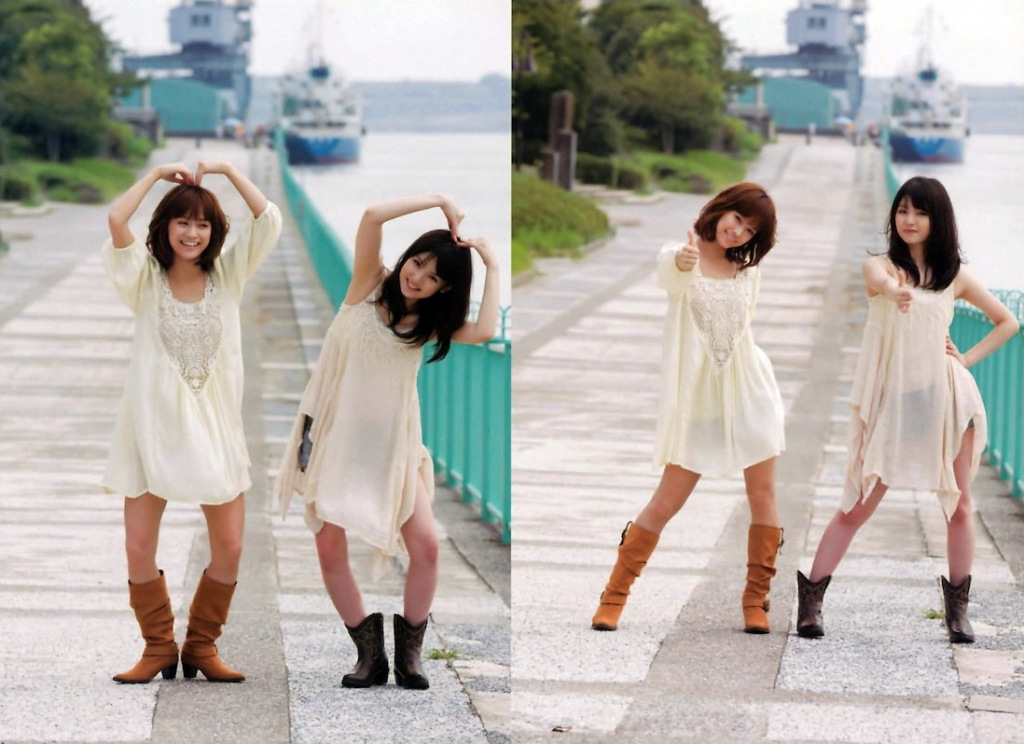 Sayu/Eri episode #1: One morning Sayu received an urgent-looking email from Eri, saying “Sayu, did you leave the house yet?!” Sayu, wondering if something had happened, replied “No, not yet. What’s wrong?!” Eri replied, “Is it cold today?” While Sayu knew that that’s clearly something Eri should’ve found out by herself, she in her kindness asked her mom and then mailed Eri back: “I haven’t left the house today but my mom says it’s cold.” Eri replied: “You should’ve told me so sooner! I have my ankles exposed today! It’s too late now, I’m going to leave the house!” Sayu obviously just thought to herself that everyone is free to do whatever they want, but later on in the day, Eri would harass Sayu with emails blaming her about her ankles dying because it was too cold.

Sayu/Eri episode #2: Then the other day, Eri mailed Sayu asking if she was doing okay, and that she was just about to go to the dentist herself. Sayu didn’t immediately notice Eri’s mail, so she only answered her some minutes later. They proceeded to have a normal, intermittent email conversation after that… until the following exchange took place.

Eri: Sorry Sayu, I gotta go. I’m gonna get sushi!
Sayu: Ah, did your dentist appointment end already?
Eri: Wait, how did you know I was at the dentist’s?!?
Sayu (not believing her eyes): Um, go reread some of the mails you yourself sent me earlier…
[… some time passes …]
Eri: Ahahaha. ♪

Sayu/Eri episode #3: A while ago Sayu also received a sudden phone call from Eri just as she was getting ready to get on stage for an event she was doing. The thing is, phone calls between the two are rare: they usually just have their exchanges in email. So Sayu actually felt a little bit nervous about it, wondering if something bad had happened for Eri to suddenly call her out of the blue. But when Sayu picked up the phone and the conversation started, it was clear from the very start that Eri had pretty much nothing of any value or importance to say. She just went “Sayuuuuu!” and you could hear the sounds of trains in the background — it was obvious Eri was just bored waiting for her train. Sayu couldn’t even really hear her well because of the trains clattering by. And when she heard an announcement in the background saying a train was arriving on track XX, Eri suddenly went “Okay, talk to ya later! I’m just about to go have dinner with my grandma!” It’s not like Sayu had any objection to hanging up as she was just about to go on stage herself, “but still…“, she sighs, laughing.

In conclusion, Sayu tells listeners not to worry: Kamei Eri is still the same half-assed Kamei Eri as always. 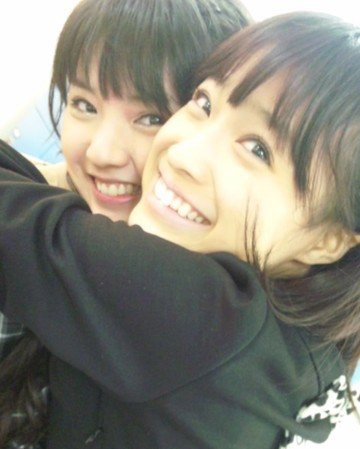