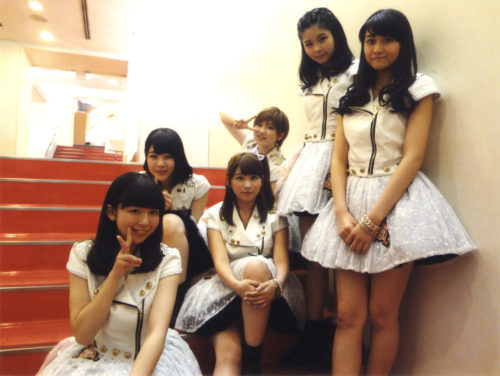 This is a corner where Rina just talks about stuff related to herself and the Bakuwara friends, often going on missions for it. To review, Rina reintroduces us to them, Michishige Sayumi, Kumai Yurina, Suzuki Airi, Tokunaga Chinami, and Nakajima Saki. She had a goal recently given to her by Takechan to get all 5 of them plus herself in a picture. She thought this might be really difficult, since she has only ever gotten pictures with one or two of them at a time, so on the last day of the Hello!Cons, she and Takechan went around to everyone and asked them and told them to meet at the same place before the show. Well, Nakajima forgot and was somewhere else, but all of the other Bakuwara friends went around calling out, “Nakky!” to try and find her. Eventually they did and they all suggested Rina stand in the middle for the picture, which made her really happy. It was also the first time all of them had gotten together, so Airi didn’t even realize that Sayumi had become a part of Bakuwara friends and was surprised to see her there. Rina felt so relieved when they finally got to take the picture because it took so much work and she hadn’t asked until the last day. Here’s the picture so we can all admire her hard work. 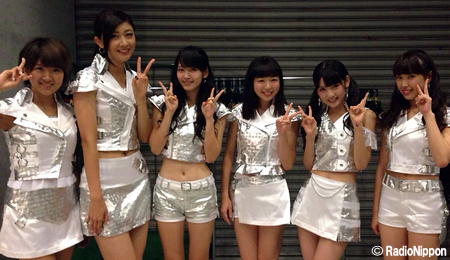 She also reads a letter from Weem. He addresses them as Kanapuu and Rinanan, which draws some laughter, and asks Rina if she will consider making a new Bakuwara corner for the radio show since Sayumi is graduating and Berryz Koubou are going on an indefinite hiatus and the Bakuwara friends will be a much smaller group of people. Rinapuu says that she has thought about it, since only Airi and Nakajima will be left and although she has worked hard on her corner and doing missions with everyone, it’s probably time to make a completely new corner to keep things going. She’s going to take her time and thing about what to do instead of Bakuwara News. She hopes that everyone will continue to send her letters and maybe help her think of a new corner.

Yes, just as they are about to read some fan letters, a special surprise guest walks in: Takahashi Ai! Both Rina and Kana are startled and shocked by her sudden appearance. She is here to promote her new movie Karaage USA, which is her first leading role in a movie.

Rina: I really adore you, Takahashi-san.
Ai: That’s a lie, you’ve never said anything about me!

Rina assures her, however, that she never says anything around her, even when they performed at Hello!Cons together because she gets so nervous. However, Takechan got her mother to go out and buy Ai’s photobooks, which all of the 2nd gen members look at together, even as recently as yesterday. Ai is shocked because she had no idea she liked S/mileage this much (only because they bought her photobooks). This causes Kana to whisper “Thank you” in an awestruck manner. Ai is still surprised they even know who she is. Kana brings up, however, that she and Ai have never actually performed together. Rina has, but Kana has not, because the 2nd gen were announced right before she graduated. Once they tell her that they joined 3 years ago she starts to remember. She asks how H!P has been since more and more people have been added and they’re becoming senior members of the company. Kana says that because now 3rd gen is finally joining S/mileage, it will have more of an effect on her in terms of making her want to try harder and be more reliable. Rina adds that it’s strange because she doesn’t want to be distant or too far above the new members like a lot of seniors tend to be, she just wants to be friends.

Ai asks them if they have any questions for her, and Rina says no, she’s just too happy that Ai is actually here to ask her anything. Kana asks if she has any advice for becoming a senpai or if she had anything she really wanted to teach her kouhai. Ai says that it was particularly difficult for her the first time she became a senpai because it was to the 6th gen members, which included Fujimoto Miki who was older and a solo artist. Even when the other 6th gen members followed, she said she wasn’t sure how to interact with them because she didn’t know if she should criticize Miki for things or even the other members because they were so close in age to her. However, she advises that even though being nice and friendly with the new kouhai is a good thing, they need to be forceful when it’s appropriate or else they won’t learn as quickly and might not respect them as much. If they can also learn to get their kouhai to listen and to say what they want to say very concisely rather than just getting mad, they will grow more, too. 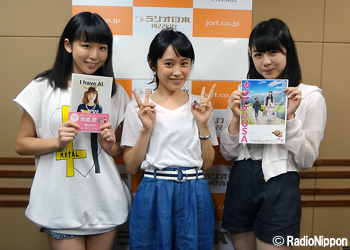 Back to Ai’s movie. She discusses the plot, which focuses around a karaage (Japan’s variation of fried chicken) store and an immigrant father and daughter that try to make it work. Ai says that it will definitely make people want to eat karaage after seeing it, and Rina says that she wants some just from hearing the description. Ai says it was very interesting working with foreigners and she even got to talk with the actors in English a little bit. She hopes everyone will go see it. I hope we’ll get a review of it in Nakanicinema sometime in the future.

They end the show promoting their play, Smile Fantasy. Rina says that compared to previous productions, she’s been really comfortable rehearsing and getting ready for everything. Maybe it’s just because she’s playing herself, but Kana thinks that it’s kind of embarrassing at the same time to play herself in a role. She was a little embarrassed before in Lillium because she had to play a romantic, masculine role, but this feels strange in a different way. Kana says that Rina’s role in particular is fairly strange so everyone will want to see it.