Takechan introduces the show by asking Meimi about her summer, since the fall equinox is right upon them and the official end of summer and the heat is here. Meimi says she doesn’t think that this summer was that hot, which shocks Takechan. Meimi explains that in Gunma, her home prefecture, it’s exceptionally hot, so for her to say that she didn’t feel as hot this summer means that she didn’t really go back to Gunma that often and spent most of her time in other places. Takechan says that she felt the heat most when she was in Hokkaido because the weather changes are insane there. They’d go one day and it would be nice and cool and then the next it would be insanely hot. Meimi chimes in to say that she noticed people in Hokkaido mentioned the weather a lot more and probably spent more time watching weather forecasts as a result. Takechan had no idea, but she does think that this summer was particularly hot in Kantou. Meimi argues and says that they didn’t say anything about major heat waves on the news or anything so it was probably just because they were doing lots of events and things. Takechan says she doesn’t watch the news unless she has nothing else to watch so she doesn’t know anything about it. So let’s start the rest of the show! 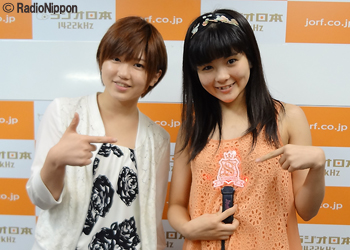 Since it is the end of summer, they bring up all the things they haven’t gotten to do. Most of Meimi’s missed experiences involve water: she hasn’t gone to the beach or to the aquarium or to the pool. Takechan interrupts to say that they did go to the beach (which is true, they did stop by for all of maybe 15 minutes in Wakayama over the tour) but Meimi says that it doesn’t count, they only got to put their feet in the water and didn’t swim. Takechan says that’s enough, Meimi vehemently disagrees. She goes back to the aquarium issue, because she adores fur seals. She says that the staff even brought her a script for Tamura Gekidan involving a fur seal and it made her sad. She wants to see one really bad.

Takechan suddenly realizes that you can actually go to the aquarium all year round and wonders why Meimi was so insistent on doing it during the summer. Meimi says duh, because obviously it’s way better in the summer, didn’t you know? Takechan did not know. She does not go to aquariums.

Takechan: I just don’t really go…
Meimi: WHA–
Takechan: I mean I have gone before, but–
Meimi: They’re SO much fun!
Takechan: …I know, but I kind of don’t like them…
Meimi: Huh?
Takechan: …I’m afraid of dolphins.

Yes, Takechan has been afraid of dolphins ever since the Yattaruchan Campaign with Kananan, when they went behind the scenes at an aquarium and a dolphin kept messing with Takechan and trying to bite at her feet. Meimi doesn’t care, she still loves them.

Takechan doesn’t have much that she didn’t get to do over the summer. She got to go to Universal Studios Japan and to the beach and she’s pretty satisfied. She did, however, want to go back to her hometown and go to a festival with all of her friends, but luckily she had a dream about it and that’s good, too. Takechan says she has so many friends from middle school that she hasn’t seen in years but would love to go to a festival and see everyone. Meimi says that it’s the opposite for her, and she doesn’t want to go to a festival in her hometown because she knows so many of her old friends will be there and it would be awkward since she has changed so much. Takechan says the only thing that has really changed about her is her hair color. Meimi thinks Takechan was cute with black hair, but Takechan has no plans to return to it for now.

In Takechan’s special baseball-oriented corner this week, she will attempt to place the members of C-ute in baseball positions. Why? Because she couldn’t do it for Juice=Juice, and this will be easier. Takechan starts with someone who she knows without a doubt where she would go: Nakajima Saki would be at first base. Meimi is shocked… because she doesn’t know what that means. After a brief explanation of the rules and items of baseball, Takechan says that she would put her there because it’s a very important position, but, well, they’re all important positions, and then she goes into a long-winded description of all the ways a first baseman could catch a ball but ultimately decides that whoever is in that position needs to be both flexible and not too short, so that’s where Nakajima goes. Okai Chisato would also definitely be the catcher. This is because she seems like the type who would always run after the ball even if it goes the wrong way and would protect everyone, if that makes sense. While Meimi sounds rather bored throughout this discussion, Takechan assures her that she is dumbing down the material just for her so she can pay more attention. Anyway, Hagiwara Mai would be second base. Takechan has a very difficult time explaining why. She says it’s because she seems like the kind of person who would be able to get the ball and move it from place to place. Meimi says that this is all very hard to understand, although she says that Takechan is doing a good job trying to think about it. Suzuki Airi caused her some problems because she seems like she’d be more of a manager than a player, but to keep things simple, she puts her on third. That’s all. Yajima Maimi would be the pitcher. Pitchers are tall and Maimi is tall and she’s strong so she would fit that position in most everyone’s minds. Airi is still bothering her, though, and thinks maybe she’ll just get rid of third and leave her as manager. The end.

Meimi: So… how many times have you done this? In your head?
Takechan: I think about it a lot, but this is the first time I’ve done the actual positions.
Meimi: It was really long.

Takechan says that if she didn’t explain it so thoroughly it would have been much shorter but she wanted to make sure everyone understood. She is glad that she’s with Meimi, though, because if she were with Rinapuu she would get mad and tell her to hurry up halfway through. 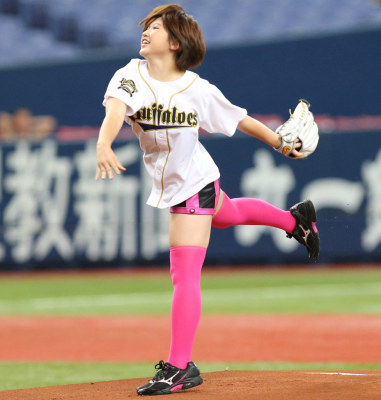 After Takechan literally takes up half the show with her baseball corner, it’s time to say good-bye for this week. So Meimi says “guu-bai” and it’s over. I personally hope for less baseball next time.