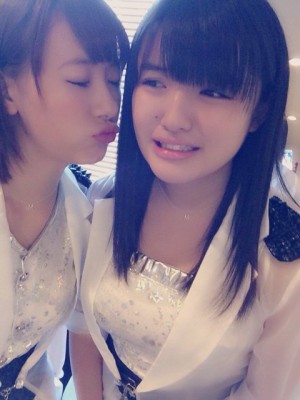 She still fails. “Its difficult!” Erina protests. Kanon gives it a go:

Kanon also protests that it’s difficult, while Erina thinks she did it too slow. Either way, neither even know what the tongue twister means. The staff decide Kanon won this round, and they move on to the second one: “kinkyu kyuko kyou kyukon konnyu”’ however Erina can’t even say it slowly correct which elicits a “How am I supposed to know what to say!?” from Kanon.

Erina does it…with some success? Then Kanons:

She at least only messed up at the end, meaning Kanon won that round. Before the next round she reminds Erina that if she loses this round, she has to give the cutesy self appeal. With that, Erina reads the next tongue twister: “zombie no jumbo gyoza” She gives the twister a try, messes up immediately, and gets to try again:

Kanon can barely take her turn at the twister from laughing too hard.

And so, Kanon wins again. As a result, Erina must do her best super cutesy appeal! There is a small script to go along with it, so she takes a moment to read over it before starting:

“Big brother, I can’t sleep. Sing me a lullaby. Then, Erina will be able to sleep thinking of you. Ehehe! Goodnight!”

The two bust out laughing, wondering if that’s really a radio show self appeal? Erina then spins the situation and says Kanon should do it too. Protesting, Kanon thinks everyone got the message from hers, but is put on the spot to do it as well:

Well, she’s not sure why they both had to the batsu game although she won, that signals the end of the segment.

Message 1: “Its sudden but, during a recent release event there was an challenge on who would perform “Suki na Senpai”, right? Since the 9th generation won, I have a question for Kanon and Erina. How did you feel about singing the song after four years?”

First off, the two felt like they didn’t want to lose in the competition, since they were both looking forward to the potential opportunity. They were even happier when they found out it was aired on Hello! Station.When Erina sang the line “Am I beauty today?” the fans will yell out “I love you”. that sort of innocent yelling made her very happy when she was younger, howeve she really thought “Maybe they like me a little bit” and decided to perform it with that sort of feeling, like “How should I do this to make everyone pleased/happy” although it ended up the fans yelled it for anyone who sang that line. Kanon laughs, telling the audience to please don’t try to deceive Erina. She recently watched their concert DVD performance of Suki Na Senpai and thought they were all pretty cute back then. Getting to perform it again was great fun, although they’re not sure if they’ll be able to sing it again. Either way, they’re happy they had the opportunity.

Message 2: “The two of you have green as your member color. Kanon has expressed dissatisfaction that there is too much green within the group on the radio show before. What are the two of you’s thoughts on your green color? Also there are new member t-shirts with the from the latest concert that are in full color. Fans are happy that they can wear their favorite member’s color again. Please share your thoughts on that as well.”

Besides Erina and Kanon having a green as their member color, Masaki is also a green; emerald green. Before, Kanon used to have her costumes be more colored in an emerald green, but now Masaki’s are more like a true emerald green and Kanon gets a very dark green, which Kanon doesn’t love as much. Moving on, Erina thinks its great that fans can buy t-shirts in their members color. She had gotten used to the fans wearing the black, white and grey t-shirts but prefers the fans wearing the colorful ones, as its easier to see who likes who. Kanon agrees, adding that the generation number being on the t-shirts made it much easier as well. The t-shirt itself has the potential to just look like a normal t-shirt too, with just a number being present. Erina adds in that she thinks its very fashionable to wear a pale green on a regular basis. Reminiscing, Kanon asks what Erina thought when her member color was purple. To Erina, purple was fine overall, but thought it great to receive a member color from a senior. There is a lot more history to the color. Kanon reveals that she thought pale green suited her better when it was announced she would be changing her member color, making Erina very happy. Although, at the same time, it was annoying that another member was green. Regardless, ending the thought, Kanon thinks they both have great member colors.

Message 3: “I was surprised to find out that Erina is your second guest on your show. Mizuki and Erina have the “ponpon” relationship, and Kanon and Riho have the “rihokano” relationship. What is Kanon and Erina’s relationship? Also, I am curious, Erina, why do always add “chan” to the end of Kanon’s name?”

To start, Kanon wants to know why Erina always does that too. Simply put, “because Kanon-chan is Kanon-chan,” Erina says. “Oh. What?” replies Kanon. Expanding, Erina explains that it just kind of came to be, when they were doing things, she just naturally began thinking of Kanon as “Kanon-chan” in her mind, and it just sort of stuck. However, with Riho, she was good at dancing and was advanced, so the “chan” never came to her. Similarly, this sort of thing happened with Mizuki too. So, the “chan” stuck with Kanon, possibly because she was the youngest at the time. Regarding the two’s relationship, Kanon thinks they think of each other pretty often. They kind of have a “business partner” feeling, but also “play partner” feeling, since they went to Disney together before. “We laugh regardless” is brought up by Kanon as their relationship, to Ikuta questioning whether that is really the best description. They try to label it further, comparing Sakura and Ayumi. who have a “business partner” relationship and knowing the two don’t have the image of never speaking with each other, like Erina and Haruna. They talk normally and go out together, so perhaps there isn’t really a label for their relationship, it’s just normal. So don’t worry, their relationship isn’t bad at all. It’s just really normal. 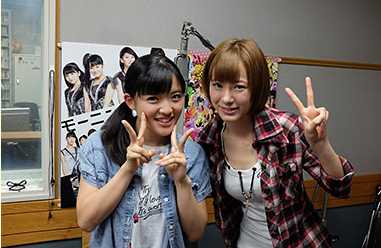