Message 1: Tell us about your cat! Give a self introduction for Bii-chan. Nyao~

Kanon thinks giving a cat self-introduction is great. Bii-chan likes to play, especially with bottle caps and tissues. Bottle caps are a problem to leave out or even have in the Suzuki household, as Bii-chan will immediately try to play with them. Although, when Bii-chan is making a “Give it to me!” face, Kanon will give the caps to her pretty much no matter what. Bii-chan will proceed to play fetch with the bottle caps. When it comes to tissues, Bii-chan is prone to chirping about when she sees one and will be so determined to play with the tissue that Kanon can’t put them in the trash can, as Bii-chan will just take it out. As far as Bii-chan’s personal self introduction, Kanon took a recording of Bii-chan’s meow:

She has meowed this way ever since Kanon got her. It is also why Bii-chan is calld Bii-chan, as she says “Biiiii” instead of “Meow”. 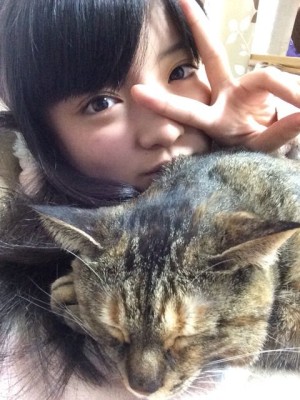 Sleepy after playing with all those bottle caps and tissues

Message 2: The rehearsals for the spring tour have already started, huh. When you were preparing for your first tour, you had many additional lessons, right? I’m sure thats how it is for the 12th generation now, please tell us about your preparations for the upcoming tour.

The 12th gen officially joined in January and have been having rehearsals with the rest of the group consistently in preparation for the start of the tour in April. They have already performed together at the Hello! Concert with the ‘15 version of Tiki Bun, however. Now that they’re in the thick of rehearsals, Mizuki, Riho, Erina, who have the most experience with the choreography, have been helping out the most. Although Kanon feels like she is not up to par with her generation mates, partially due to her foot injury. But, even with her mild disadvantage Kanon thinks that Morning Musume ‘15 as a whole really wants to do their best. They are learning and smiling together as a group. Overall, Kanon feels that the 12th Generation will be fine as the whole group is working together towards the concert tours success.

The third message Kanon reads is a call back to last weeks episode about Sugakiya Ramen. The listener asks how Kanon eats the egg in her ramen bowls; does she she leave it be or mix it in. Kanon professes that the best way to eat Sugakiya noodles is to break the egg and mix it in with the broth and noodles.

The corner where it is Kanon’s goal to receive letters from all around Japan. With each different city she receives a letter from she colors that city in green. Thus far she has received mail from many places within Aichi, Mie,  and Gifu prefectures. Where will she get mail from this time?

Letter 1:  From Saitama, postmarked from Shinshiro, Aichi. They explain that the were in Aichi when sending the postcard, and ask if she has tried gohei mochi before.

Kanon has! It was one of her grandfathers favorite foods so she would have it often with him. After moving to Tokyo, Kanon would often get cravings for it. However, because its an Aichi specialty, most Tokyoites didn’t know what it was. When Haruka went to Aichi at some point, she ate lots gohei mochi, so the two of them can gush over how delicious they are. Kanon is positive that just trying gohei mochi once will make you obsessed with it.

Letter 2: From Tajimi, Gifu. This sender tells Kanon about a special Eel Kappa that has been going around Tajimi. The Eel Kappa desigin is apparently done by the author of Anpanman.

Oh! Kanon thinks its cute. She likes kappa because they have an image of being green. She has worn a Kappa kigurumi once for a DVD so she likes them. Regarding eel, eel is a specialty for Aichi and she eats it often so combining the two is great idea to Kanon.

Letter 4: From Anjou, Aichi. Anjou is an industrious city that has a Danish Park (called Den-Park) where there is an intense Tanabata Festival in the summer. The writer recommends Kanon visit the festival someday, if she hasn’t already.

Kanon confirms that Anjo’s Den-park has an awesome Tanabata festival that she tries to visit every year to enjoy the scenery and eat good food.

Kanon received two other postcards from Toyohashi and Ama in Aichi. They each had very short letter’s written on them, mostly just being happy for submitting a postcard to help Kanon out. Although, the writer from Toyohashi asks Kanon to have Haruka on the show someday. 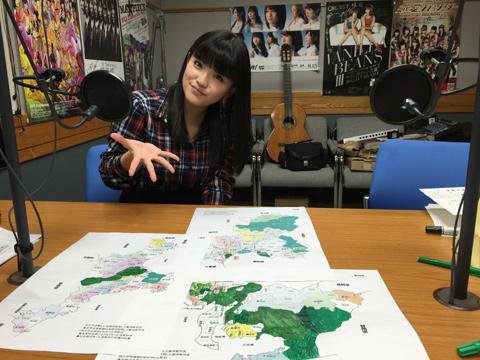 Kanon green is filling up the maps!

During the ending segment Kanon receives another word to say sexily: