Fan mail #2: The listener shares that they’ve recently become a fan of Gaki-Kame. They really like their group’s newest single, “Onna ga Medatte Naze Ikenai,” and in connection with the song’s title, they wonder which member of Morning Musume is the most eager to be in the spotlight all the time.

Kame suggests that there are only seven members worth considering — she herself is apparently not at all eager to stand out. Gaki-san is somewhat suspicious of her co-host’s claim, but she nevertheless says that her answer would probably be Tanaka Reina. That’s the easy answer, though — if one was to dig a bit deeper, she thinks it might actually be Mitsui Aika. While it seems like she wants to talk a lot and be at the front more, it feels to Gaki-san like she’s sort of holding herself back. It’s only in very recent times that she seems to have started allowing herself to stand out more.

Kame thinks the answer is actually Junjun: she’s tall which means she’s kind of always stood out to begin with, but more than that she’s the cutesy, burikko-type. Gaki-san agrees. Since her Japanese level has gotten better, she’s started using overly cute words such as “nyan” a lot more, even in private emails. Plus, at 22 years old she’s a proper adult age-wise which makes her “nyans” have all the more impact. Thus, Kame has reached her conclusion regarding Junjun. “I have her all figured out,” she says.

In short, though, Gaki-san says they’re probably all more or less eager to stand in the spotlight. 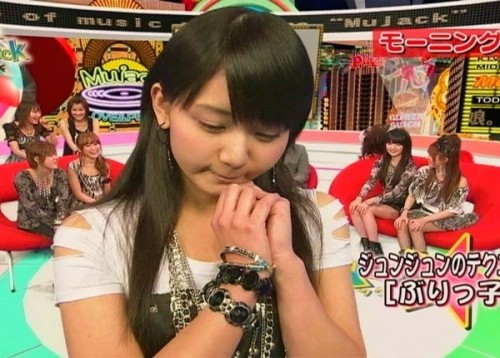 One of the many burikko characters of Morning Musume

Fan mail #3: This message is from Kevin, an American fan of Morning Musume. He wishes to know what Kame thought of Gaki-san before she joined the group herself, and in turn, what Gaki-san’s first impression of Kame was.

While in the beginning she was just “Niigaki Risa” — member of almighty Morning Musume — Gaki-san points out that now Kame’s just constantly going “Gaki-saaaaan” like it’s nothing. Still, even before joining the group, Kame could always tell that Gaki-san was one member who had truly joined the group because of her love towards it — Gaki-san’s “beam” reached her.

Meanwhile, Gaki-san thought Kame was just a really quiet, well-mannered girl — even when she did speak, the volume was around the same level as that of a mosquito buzzing. She was nearly causing staff to become angry with her because of how quiet she was. Now? It’s impossible to tell when she actually broke out of that shell and became who she is today. Kame thinks it was thanks to the other members around her; Gaki-san says she doesn’t want Kame to make it sound like anyone’s fault but her own.

Fan mail #4: This listener says they admire Kame’s way of life and they thus want to ask her for some advice. They’re looking to buy a zaisu tatami chair, and they were wondering how one should go about picking the best possible chair.

Kame thinks the listener shouldn’t overthink it: it’s better to just go out and buy any chair without worrying about it too much and just seeing how you like it. If you start worrying about if it’s comfortable enough and stuff, you’re never going to end up buying one — it can never be as soft as a sofa, for example. So, Kame says the listener ought to just buy whichever cheap one and see how it suits them. “I see,” Gaki-san promptly says, and asks the listener to send them another message if they actually do end up buying a new chair based on Kame’s advice alone.

Fan mail #5: Kame introduces the final message of the episode: “hey mom, why must you always put green peas in our food?“

“Wait, that’s it?! That’s the whole message?!” Gaki-san asks, and Kame confirms that it is indeed. Gaki-san reckons the listener’s mother must be putting green peas in nearly every meal she makes. They must’ve sent this cry for help to Gaki-Kame before actually relaying it onto their mother.

Kame: So the listener probably hates green peas then.
Gaki-san: I guess so.
Kame: Now I feel bad for green peas — I hate them, too.
Gaki-san: Yeah, but don’t worry: there are people out there who love green peas equally as much as you hate them.
Kame: I wonder about that… 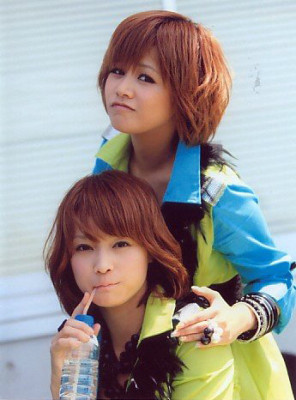 Today is Gaki-san’s turn. Some time ago, with her short vacation in January approaching, Gaki made up her mind that she was absolutely going to go to Disneyland on one of her days off, so she asked her nail artist to make her nails Disney-inspired for the occasion. Thus, she got her nails done in the Minnie Mouse style of red with white dots. The day after, her mom, too, went to a nail salon. She then sent Gaki-san an email during a break in one of their concerts and it came with a picture of her nails: she’d done them exactly the same way as her daughter, only with pink instead of red. Kame was pretty surprised to hear about Gaki-san’s mom getting her nails done in such a cute way. “I mean, she’s lived at least like double the amount as you have, right?!“

In any case, Gaki-san awards five stars to her Minnie nails as well as her nail artist who made them for her.