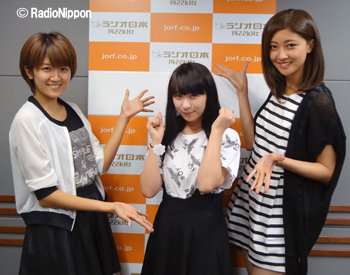 Fan letter #2: With Chii and Kumai-san having both been idols for over 10 years, the listener asks them if there are any specific things that they unconsciously do in their daily lives that remind them of the fact that they’re, indeed, idols.

Kumai-san talks about recently having rewatched a video that she did with her class in elementary school. It was just meant to be a little memory for them for later in life and it had everyone taking turns talking to the camera. Kumai-san had already joined the entertainment industry by then, and the way she held the microphone in the video was completely different from the rest of her classmates: whereas they would be wondering what the best way to hold it is or how it’s going to pick up their voices the best, Kumai-san was holding it all cool and professional-like. She was watching the video just thinking “what was I doing, trying to look all cool like that?!” That made her feel like an idol.

Kanon says she’ll feel like this sometimes when meeting relatives or acquaintances for the first time in a long while. Especially the old uncles and such will want to come and shake the younger folks’ hands, but for Kanon, she’ll automatically switch into handshake event mode and do the handshake with both her hands.

She’s also accidentally introduced herself as “Kanyon, aka Fukuda Kanon” at school at the start of a new term — obviously resulting in the whole classroom exploding with laughter.

Chii has a story from when she was in junior high school. She had a very close friend those days who one day just out of the blue marveled how pure Chii’s eyes are. Chii just went “huh?!” and she couldn’t understand what she’d meant. The other day when she met this friend again after a while, she made a comment about Chii’s eyes having become darker. Chii says that even though she is an idol even now, she must’ve been even greater of an idol back in those days (around the time of “Jiriri Kiteru”).

Also, Chii says that every once in a while when she’s just walking down the street she’ll see someone do a double take on her and that kind of makes her think “ah, I guess I’m a bit of an idol after all…” The other day when she was walking with her mom, someone stopped and did just that. This made Chii’s mom a bit worried as she thought that person looked a bit suspicious, but Chii just brushed it off by kind of snobbily saying “Oh, that? Nah, that kinda thing happens to me a few times a day at least.“

Chii adds, though, that if she’s walking outside with Maimi, no one will bother doing any double takes on her anymore as everyone’s eyes will be focused on Maimi. Kumai-san notes that Maimi is, indeed, just the perfect beauty. 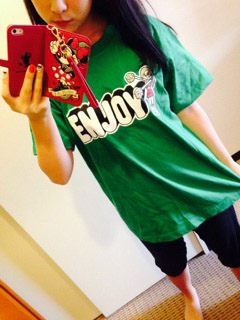 Topic #1: Previously on this corner Chii talked about Bakuwara Friends and its troubles. There’s now been a new development in the story. Chii says that after about three days or so after recording that previous show, Rinapuu approached her when they were waiting for their turn to go on stage at Hello!Con. Rinapuu told her that her next mission she wanted to do was to (again) take pictures with all five members of Bakuwara Friends (Michishige Sayumi, Suzuki Airi, Nakajima Saki, Kumai Yurina and Tokunaga Chinami). But she just left it at saying she wanted to do so; she didn’t actually take a picture with Chii right then and there.

Chii wonders what the deal here is, and asks Kanon if Rinapuu is in fact quite shy. Kanon says Rinapuu gets quite clingy when she gets to know you well, and she suggests that in Chii’s situation, Rinapuu just wanted to come and have a conversation with her about something or other. Kanon says she still has lots of things she doesn’t quite understand about Rinapuu so she’s not all too sure about this, though.

Chii doesn’t know what to think about the weird sense of distance between her and Rinapuu, and she’s not quite sure if this latest episode means they’ve gotten closer or if they’ve grown more distant. She promises to keep us updated on any future developments.

Topic #2: Kanon has something to report on Sugaya Risako. Kanon talks about how S/mileage calls its fans “S/mileage Family” or “Shinseki no Kata” (“relatives”) (the latter draws laughter from the two hosts) and how °C-ute calls its fans “Team °C-ute” and so on. This prompted Kanon to ask Risako what Berryz call their fans, and Risako immediately replied “Berryz wota.” Kanon thought this was quite funny and she wants the hosts to confirm if what Risako said is accurate.

Chii and Kumai-san both agree they should probably think of a better name than “Berryz wota.” Since “family” and “relatives” are taken, Chii suggests “Berryz Acquaintances” and is met with laughter. “What about Berryz Neighbors?“, asks Kumai-san. Chii says they’ve actually talked with all the members about how “Berryz wota” might be a little too crude, but she’s pretty sure the discussion ended in them agreeing that, at the end of the day, it’s the only name for their fans that feels right.

Kanon says that it’s originally Wada-san who started using the name “relatives” to describe their fans, but Kanon says it kind of made her confused as to what kind of relatives that’s supposed to mean exactly. Thus, she says, she just refers to their fans as “otaku” even when addressing them on stage. Chii and Kumai-san, laughing, say “otaku” is way too direct.

The hosts say they’re going to take some time to think of a new name for their fans. They promise to consult their PR Ambassador, Kanon, and get her approval before adopting it into use.

Song: Berryz Koubou – Masshiroi Ano Kumo (Kanon introduces the song by making an allusion to the song’s lyrics. “If Kumai Yurina-san said she wanted to go studying abroad, I would probably feel even more lonely than her dad,” she says.) 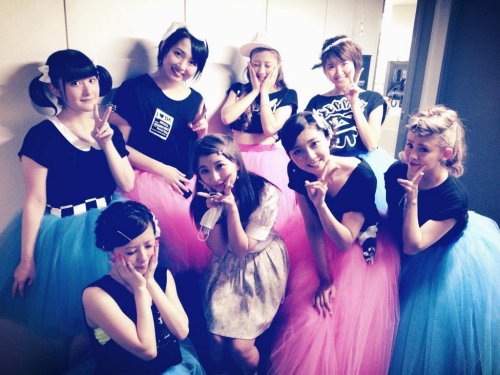 Berryz Koubou and their loyal fan