END_OF_DOCUMENT_TOKEN_TO_BE_REPLACED

We start with general letters! This month’s theme is ‘It’s summer!‘ The first letter comes from Dance-san, who also requested the previous song.

School starts a week earlier in Hokkaido than it does on the main island, and Dance-san’s younger brothers are getting Dance-san’s help with their homework. Homework reminds Dance-san about their research project in primary school – a papier-mache creation. Following up from that, Dance-san asks Maimi if she still remembers her research projects, and if there were any projects done by her friends that caught her eye.

Maimi once made a papier-mache savings box, but she feels like she probably got a lot of assistance with making it, as she’s pretty bad with that sort of hand-crafting. Moving on to projects that caught her eye, one of her friends used ice-cream sticks to make a savings box in the shape of a house. The roof could be opened by a hinge, giving access to the stored money. The girl who did it was really artistic.

Maimi takes the opportunity to talk about another project done by the same girl. It’s difficult to explain without seeing it, but it involved using papier-mache bricks held together with a steel frame, and a good use of colours – reds and browns. Maimi enjoys looking at that friend’s artwork.

By the time of broadcast, the kids in Hokkaido have probably started schooling. For the Kanto region, school would generally start in September, so Maimi feels that there are likely to be a lot of kids currently rushing to finish their homework. Maimi gives them a friendly reminder to not stay up late, take care of their health, and wishes them good luck. 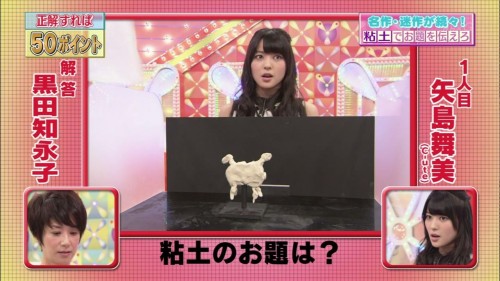 Maimi hand-crafting: That’s supposed to be a poodle